And Spotting a wayward T.A.R.D.I.S.

And any awesome panels and presentations (more than I can fully represent) including:

Diana Rowland and Stina Leicht at the urban fantasy panel

Sarah Pinsker’s concert. I love Sarah Pinsker’s fiction, especially “Our Lady of the Open Road.” Sarah’s also a singer-songwriter. Her lyrics are fully as awesome as her stories, so I’ll be picking up some of her music. She played a few songs from her new CD. Can’t wait until it drops!

…And Yesterday was Already Tomorrow: Ancient Greece and Rome in Science Fiction with Robert Cape and Timothy Phin. Tim delineated many ways in which you could find the Roman Empire in the Radch (aka the civilization Ann Leckie builds in her Ancillary novels).

And of course, the Hugo awards ceremony. Pat Cadigan was a highly entertaining toastmaster, and the results were much as I would have wished.

In other news, I missed most of the drama, of which there was apparently plenty:

But to finish on a more positive note: I think the most fun I’ve had in a while has been playing along with the launch activities around Mary Robinette Kowal’s Ghost Talkers. 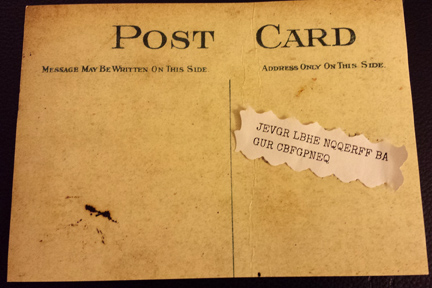 Cracking this code led to the next clue…

So much code-breaking! Sadly, I wasn’t able to make it to the Tor party Friday night. One lucky code-breaking winner received an original story, written by Mary to their specifications, on a 1913 Corona #3 portable typewriter, while they waited!

Now that’s how you launch a book.

Man of La Mancha at the Marriott Theatre in Lincolnshire served up the most moving time I’ve spent in a theatre in a long while.

For those unfamiliar with the show, it’s a play-within-a-play. Miguel de Cervantes, the author of Don Quixote, is arrested and put in a holding cell to await the Inquisition. He waits with his assistant, among those who also wait: if they’re lucky, just to be tried for theft or murder; if unlucky, to be called before the Inquisition. The other prisoners rob Cervantes of his belongings, including a manuscript. To ransom the manuscript, he enlists his fellow prisoners’ aid to present a story which he hopes will convince them to let him keep his manuscript.

In other productions I’ve seen (or performed in), both the outer and the inner play are set in 16th-17th century Spain. For this production, director Nick Bowling (and designers  Jeffrey D. Kmiec, Jesse Klug, Nancy Missimi, Robert E. Gilmartin, and Sally Weiss) reimagined the setting of the outer play, presenting the characters as modern—people you could easily imagine populating a present-day holding cell. Since these people had no notion of when they might be allowed their day in court, if ever, the production evoked associations with any justice system that’s arbitrary and unfair. As we know from the news, there are too many people in the world being held unfairly even in our supposedly enlightened age.

You should go. To this production, if you can, though it’s only possible until August 14, 2016. If you can’t attend the Marriott production, your next best bet is probably to listen to a Broadway cast album of the show. Don’t bother with the movie.

The ensemble acting and vocals at the Marriott Lincolnshire were sublime. While I can’t mention everyone, I need to say that for both acting and singing, Nathaniel Stampley, Danni Smith, and Richard Ruiz brought the production to a peak of near-perfection. I think it was the combination of the immediacy (or maybe the timeless feel) of this production and the beautiful vocals that put it over the top for me. I wept like a tiny little girl. In my defense, I was not the only one. I heard sniffles from BK, Sis, Cookie, and Cookie Jr., as well.

There are people who knock the musical as reducing Cervantes’ work too much, or as having too simplistic a message. I can’t speak to the former since I haven’t yet read his novel. As to the latter, I say, “hooey.” Evil remains in the world, and it’s not illusory. We have our work cut out for us. If anything, even a Broadway musical, can give us the courage to face the task, I say revel in it.

And then sally forth.