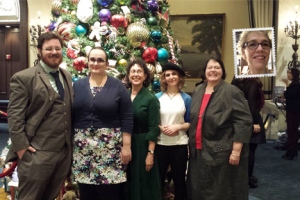 We had tea at the Drake again this year.

Last year, photographers wandered through the Palm Court, taking pictures if people wanted them, but they weren’t there this year. Resourcefully, we took our own pictures with our handy smart phones. I took the one above, and Sis took the rest. 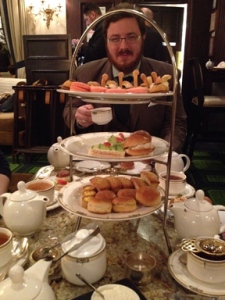 I didn’t understand why they gave us only five of each item on the tea caddy when there were six of us. For some things, this didn’t matter; not everyone wanted a cucumber sandwich, for example. However, everyone wanted a scone and a swan-shaped cream puff. 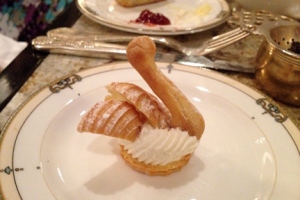 So, while we may try a different tea venue next year, it looks like holiday tea is becoming a tradition. Lori and Danny both like it and we like to make them happy. 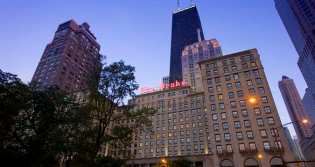 The Drake Hotel in warmer weather

There was much Chicago over the weekend for this humble suburbanite. I wish I were better about experiencing all the wonder of living near a good-sized city. I got a ten-ride pass on Metra over a month ago so that I’d get downtown more often. I have yet to use it. Maybe that’s one of my New Year’s resolutions, or would be if I made them: use the Metra pass.

However, when you have out-of-town guests, you need to entertain them. One way we entertained ours was by taking them to tea at the Palm Court of the Drake Hotel. It was quite a crush, *she said, fanning herself.*

Well, of course it wasn’t a crush. You can’t have tea, and have a crush at the same time, it just wouldn’t be civilized. There were more people there than I’d seen before, but I understand that’s usual during the holidays. It was lovely. There was a harpist. There were probably over twenty different choices of tea, although I didn’t count them; you could also get hot cocoa, which may come in handy if you’re bringing any young princesses or princes with you. For the reprobate in the family, mimosas, bellinis, and tea cocktails were on offer, though we didn’t try those. There were finger sandwiches and cranberry orange scones with Devonshire cream, strawberry jam, and lemon curd. There were ginger madeleines, pumpkin cream puffs baked in the shapes of swans, assorted macarons, and opera cake. In all, there was a grand excess.

A charming young woman with an enormous camera went around to all the tables to take the patrons’ pictures. I don’t usually buy that sort of picture afterwards. Someone is usually blinking or slouching or otherwise embarrassed by their appearance. However, no one in our party had any objections, so I went ahead and bought our picture. Here it is: 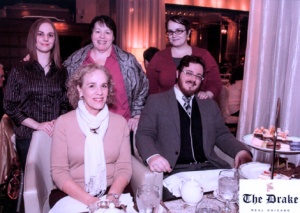 Don’t we clean up nicely? The whole experience was surprisingly low-stress. Here’s a tip from me to you: if you drive, go ahead and opt for valet parking. With validation, three hours (or less) was only fourteen dollars (not including tip), which seemed good for Chicago parking. The nicest part was not worrying about finding a nearby space on a cold day.

Actually, no. The nicest part was being together for a lovely tea.